Lord, I pray that you remove all distractions and allow us to focus on what you have to say to us. I pray that you point us to things in our lives that are relevant to John 12 as we read and meditate on it together.

In John 11, Jesus had raised Lazarus from the dead – and in response to this, the Jewish high priests began plotting to kill Jesus. In John 12, Jesus prepares for and informs his disciples and other followers of his coming death. When Jesus first predicts his death, he tells his disciples, “I tell you the truth, unless a kernel of wheat is planted in the soil and dies, it remains alone. But its death will produce many new kernels – a plentiful harvest of new lives. Those who love their life in this world will lose it. Those who are nothing for their life in this world will keep it for eternity. Anyone who wants to serve me must follow me, because my servants must be where I am. And the Father will honor anyone who serves me (v. 24-26).”

Jesus says that when a kernel of wheat dies, it produces a plentiful harvest of new lives. We often have to risk our security and status in order to allow other communities to have life. In the context of the greater Asian American Christian community, defending LGBTQ folx and calling out anti-blackness and complacency with white supremacy can leave us ostracized by our families, friends, and ethnic and faith communities. In the context of American society, simply standing up for our identities as Asian Americans and advocating for other people of color can put our jobs, our social standing, or even our lives at risk. In many ways, we have to die to our communities and to the world around us in order to fight for justice for ourselves and other marginalized groups. We have to die so that these communities can obtain their rights and live fully and freely.

Recently, I’ve been thinking a lot about Dr. Eugene Gu, the Asian-American doctor who went viral for tweeting a picture of himself taking a knee against police brutality and white supremacy. The picture shows him in his scrubs and lab coat at his workplace, kneeling with his fist raised. His caption read, “I’m an Asian-American doctor and today I #TakeTheKnee to fight white supremacy.” After tweeting this, Dr. Gu began receiving death threats. A mother of one of his patients saw his post, wouldn’t allow Gu to care for her son, and complained to the hospital about his actions. After this, Gu was placed on administrative leave and is currently on probation. According to his recent tweets, he is trying to find a more inclusive workplace, but is struggling to find a hospital that will hire him because of his recent controversies.

The consequences of fighting for justice as Asian-Americans are real. None of us are immune to them – not even doctors with groundbreaking research findings and degrees from elite schools. The model minority status is a myth because it is taken away from us the moment we speak out against the system that gave it to us in the first place. For some Asian-Americans, buying into the model minority myth is a way of playing it safe, but Jesus says that heaven isn’t for people who play it safe.

God’s Kingdom consists of people who are willing to lay down their lives for the sake of their brothers and sisters. The rewards this world has to offer are temporary, but giving up those rewards for the sake of empowering other communities has an everlasting impact.

Created by: Nikki Manderico
About the author: Hi! I’m a first-generation Filipinx-American born and raised in Durham, North Carolina. I’m currently studying Computer Science and Statistics at the University of North Carolina at Chapel Hill where I am involved in the Asian Students Association, Kasama, and InterVarsity Christian Fellowship. You can probably catch me in some performing arts center crying at a musical theatre performance and buying a keychain at intermission to add to my ever growing collection.

Image by: Sheri Park
About the artist: Sheri Park is an interdisciplinary visual artist, with a focus on video & performance. She completed her undergraduate degree from Union College in 2013, and her Certificate in Theology and Art from Fuller Seminary in 2015. When she’s not making art or at her graphic design job, she enjoys making breakfast, reading, and watching ducks by the lake with her husband in Fremont, California.

About the image:
REORIENT: home is where?
performance still
2017 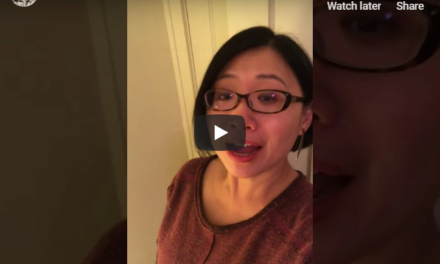 Ash Wednesday: Remember that you are dust, and to dust you shall return.