Allow us to see the familiar anew.
To approach your Word as if for the first time.
As we hold our past experience,
hold our current state,
hold our future paths,
That you might speak clearly into the wholeness of who we are across time
and to see what you’ve been doing in our lives anew.

I have never enjoyed the notion that I was to aspire to become like a sheep. Even people in Jesus’s time thought he was crazy to suggest such a notion.

Quiet. Obedient. Harmless. Sheep give me the impression that they can be treated in every which way, but aren’t strong enough or bright enough to have a say about it, while at the mercy of stronger animals and a hopefully brighter shepherd. Sheep are powerless and this does not comfort me.

I’m reminded of how Asian Americans are considered the “sheep” of American society. The spirit animal of the model minority myth. Here in the U.S., Asian Americans have permission, not privilege, to access the benefits of white supremacy so long as it is convenient to those higher up in the racial pecking order.

Once, we were a yellow peril stealing jobs from white Americans after they had taken advantage of cheap Asian labor to replace slaves. Once, the Chinese were propaganda-painted as valued citizens because the U.S. was allied with China during World War II, while Japanese Americans were thrown into concentration camps despite government research proving they would not betray their home. Today, we are a model minority applauded for our assimilation, only to widen the gap between us and other people groups of color, obstructing efforts toward building solidarity. And I will not be surprised when public narrative turns on Korean Americans should North Korea and the U.S. ever go to war.

White supremacy too easily betrays its fictional and mercenary nature when it comes to Asian Americans, because throughout history, what our race means has swung back and forth so many times at power’s pleasure. In listening to white supremacy, we as sheep have become weaponized.

Perhaps we are listening to the wrong voice. The wrong shepherd.

Then there is Jesus, a Son of God who calls himself the Lamb of God. And in claiming that he is a lamb, Jesus did the most powerful act we could ever know: he gave his life for the restoration of everything. God’s known strategy is to wield incredible power through lambs – nobodies, outcasts, and a bastard son of a single mother from a nowhere town.

A lamb means something different to God and this changes things for me. The world names me as a sheep, but there is power in us to achieve greater things beyond ourselves.

And I have already seen glimpses of this power. In my parents privately laying down their lives for me and my brother, giving up their dreams that we might have a chance at our own. In Fred Korematsu risking his life and name by going up against the U.S. itself, as he protested the incarceration of his people. And I trust this power is in me. The lamb is victorious, but it’s a power that comes from death and sacrifice. I can only hope to cultivate courage for the small and big moments when powers collide and use the fodder of my life to fight back.

What opportunities are in store – to be quiet to God’s voice, obedient to the notion that we are all truly created equal and sacred, and far from harmless, wreak some havoc to realize heaven on earth. May the world never underestimate a lamb again.

How are you uniquely positioned to challenge what the world thinks of a lamb – of you – and redefine that in your context?

Created by: Sarah Park
About the author: Sarah Park is a freelance writer based in the San Francisco area and an editor for Inheritance Magazine. Her work focuses on the cultivating cross-racial dialogue with a Christian faith orientation. 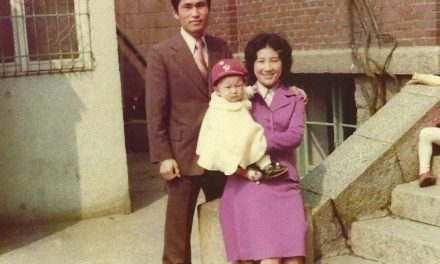