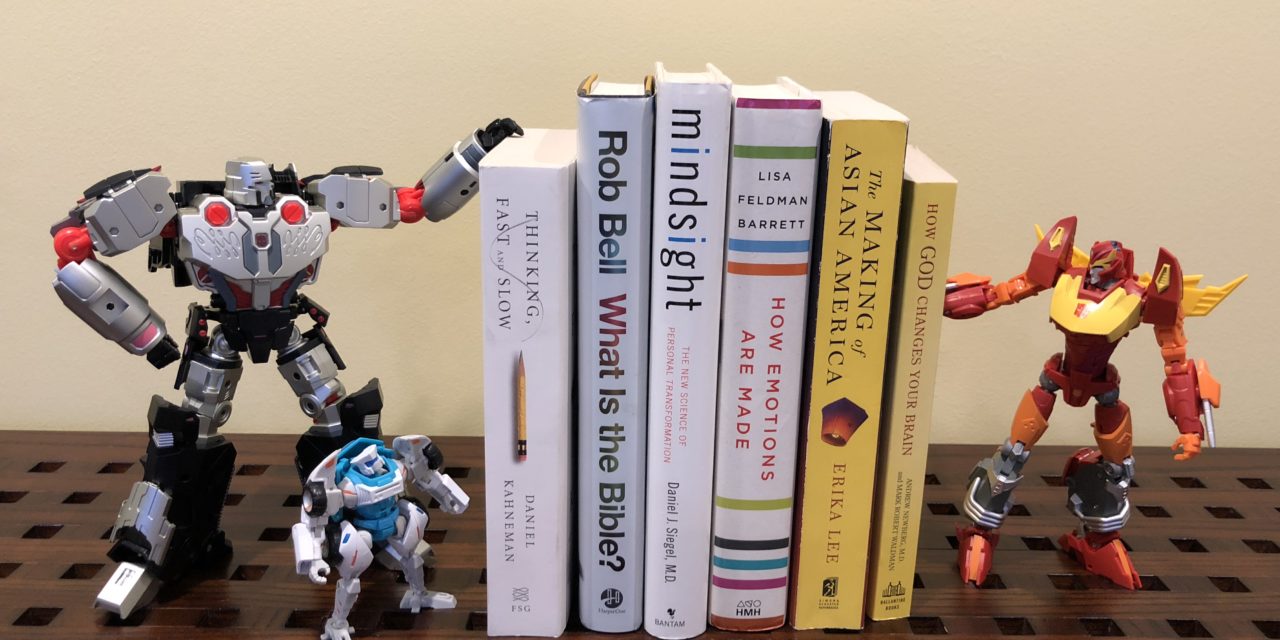 I am a typical Asian.

I’m a doctor. I’m good at math and science. I eat rice frequently. There are five accountants and four other doctors in my extended family.

Even though I’m a doctor, I decided to become a Psychiatrist who mostly practices therapy, so I spend most days talking to people about their feelings. I frequently cry during movies. I’m artistic.

I love all kinds of food. I have a high tolerance for alcohol.

My mom is not a tiger. My parents didn’t push me to be successful, but I did feel loved – that turned out pretty well for me. They speak to me in Chinese. I speak to them in English. It works. In my huge extended family, 87.6% are not accountants, doctors, or lawyers. The 87.6% is a vague estimate because I’m not that good at math.

I am a typical Asian.

I grew up in a conservative Christian home. My parents were immigrants. My community wasn’t diverse. I lived in the suburbs. All of this shaped, or more accurately, limited my beliefs and worldview at the time.

My views on race were based on narrow stereotypes I learned from TV and immature jokes kids tell each other. My view of homosexuality was based on church doctrine. My views on gender roles were built around religion and culture. I’ve held racist beliefs. I’ve described things as “gay,” and it wasn’t complimentary. I’ve put people down by telling them they were acting like a girl.

I am a typical American.

I believe in the self-evident truth that all persons are created equal, and that it is a principle worth fighting for. I believe that my voice should be heard, and it is my birthright. I believe that America is a land of opportunity.

I also believe that though MLK’s “I Have a Dream” speech is still a goal worth aspiring toward, I am painfully aware that his “Letter From Birmingham Jail” is where we actually are. We do not live in a post-racial society.

I recognize that certain people in America are not heard equally, not seen equally, and do not have the same opportunities. People of color, women, and queer people all still struggle for equality in a society that privileges the needs, comforts, and prosperity of cis-heterosexual White men.

Asian Americans also struggle for belonging. My parents were not born here but they’ve lived in this country longer than they’ve lived anywhere else. Their accent should say that they have mastered the ability to communicate in more than one language. However, White America prides itself in its monolingualism and hears an accent as being foreign, a sign of otherness. As their son, born in America, “I’m from Los Angeles” is not the answer some people are looking for when they ask “where are you from?”

I am a typical American.

We’ve all felt wronged at some point for being forced into restrictive labels. Probably because of race. Maybe because of your gender or sexual identity. Or your age. Your religion or your atheism. The era you were born into. Can we correct these stereotypes by making what is “typical” as complex as we really are?

I played pick-up basketball at a local gym for a couple years and got to know some of the regulars. It was a racially diverse group, and yes, a lot of them were Black. Like the retired aerospace engineer who invented something and seemed pretty wealthy because of it. Or the publisher of educational workbooks for elementary students. There was the reality TV producer. And the tech entrepreneur too. I was the uncharacteristically tall, vocal Asian Psychiatrist who could keep up on the A-court. Either we were all exceptions to the rule, or the rule wasn’t right to begin with.

During my residency was the first time I knew anyone who was openly gay. When you spend four years together working 80 hour weeks, you get to know people through commiseration. What I found was that their “moral depravity” and mine were roughly in the same ballpark. Other than a different distribution of X and Y chromosomes, their romantic relationships weren’t that different either. We had way more in common than we had differences. As much as I don’t ever remember choosing to be straight, I know that they never chose to be gay. And I’ve never met anyone who’s defining characteristic was based on the type of person they liked.

My daughter is six. She loves princesses, jewelry, and high-heels. She also engineers complicated projects with glue guns, has no reluctance to loudly express her opinions, comes home from her outdoor school covered in dirt, and is way more inclined to watch superhero movies than her older brother. Not “girly.” Not “submissive.” Not “delicate.” None of these words capture the full essence of this little person with the big personality that I share my life with.

I am a typical Christian.

However, I don’t believe that God is an old man with a beard sitting on a throne in the clouds, or actually a man at all. God is more like the creative force that caused the Singularity to expand with improbable precision, allowing the perfect creation of our elegant and forever evolving Universe. God is also the ubiquitous Higgs field that literally makes things matter.

Ever since that moment of creation, entropy has been part of God’s creation. I think of sin as entropy, and so in that sense, we are in a fallen world. Enter Jesus, both the Cosmic Christ and God in the flesh.

I believe lots of people are going to be in Heaven with me, including billions of good souls who never prayed to Jesus to be their personal Savior. My queer friends will be there too. I don’t believe in a literal Hell where non-Christians will burn for all eternity. That makes no sense if God is love and God wants all people to be saved and God gets what God wants.

That brings us to the Bible, which is full of Truth if you read it literately, but it is full of errors and falsehoods if you insist that it should be understood literally.

Facebook’s advertising algorithm says that I’m “very liberal” which is pretty true since I’m pro-choice, pro-science, pro-LGBTQ, anti-racist, a feminist, and voted for a Democrat every presidential election of my adult life.

I am a typical Christian.

Probably for my whole life, I was subconsciously aware that I was a weird Christian that didn’t fit in with the other Christians. It started with growing up in a really charismatic immigrant church. I didn’t feel comfortable inviting my non-Christian friends or my non-charismatic Christian friends, because I intuitively understood the culture of my church was different. When I went to college, it was made explicit that most other Asian Americans Christians didn’t believe everything I was taught growing up and didn’t have the same spiritual experiences I had.

When I learned in medical school that almost a third of all pregnancies ended in miscarriage, I questioned the Christian notion that life begins at conception. I came to understand the necessity of places like Planned Parenthood that provide comprehensive medical services for people who otherwise had no access to affordable health care. I also started to appreciate the complexities, both personal and systemic, as to why a woman would choose to terminate a pregnancy. Over time, I’ve come to understand that supporting life is much more than being against making that complex choice.

I struggled with what to say when church people in casual conversation found out what I did for a living and they passive-aggressively questioned the legitimacy of my career as a Psychiatrist. They implied that it was a pseudoscience that diminished God’s intended work when I helped relieve people’s suffering through medication or “secular” psychotherapy. They believed that psychological suffering was a sign of spiritual shortcomings. I didn’t.

I left a church after a meeting with the pastors, when they told me that despite my expertise in healthy child development, that my objection to their spanking their children (which one of them casually mentioned as part of a “funny story” during closing announcements) was wrong. They told me I was wrong because good Christian theology (and parenting) requires punishment for atonement to have meaning. And if the Bible and science contradict, a good Christian believes the Bible.

The last church we attended with any regularity, also eventually made me feel like an outsider. It was shortly after being disappointed that despite saying they didn’t hold any political positions from the pulpit, that we could pick up the recommended Christian voter guide in the lobby. Not only was it “vote Republican only” but also said some twisted things like “raising taxes is stealing” and therefore not Biblical.

Then when Donald Trump happened, I really couldn’t unsee that Evangelicalism, Republicanism, Authoritarianism, and White Nationalism were just different names for the same thing. Not only did I want nothing to do with it, I wanted to actively resist it.

By that time, I was already unchurched for a few years. I was about as passive about my faith as I’d ever been in my life. With miraculous timing, an enlightening article appeared on my Facebook feed. As I read it, for the first time in my life the concept of being Progressive, Asian, American, and Christian at the same time was revealed as a complex identity that I never even knew existed.

I am a typical Progressive.

Progress is goal oriented. It continues on a path that may have been laid out by others. It welcomes change and encourages being adaptable to present needs. Progress is optimistic. It sets out to make things better.

Progressiveness is what brings together all aspects of my identity.

It makes sense of my Asian identity as a natural evolution of my immigrant parents’ displaced culture that I inherited. I need to help define what that looks like as an Asian American.

It makes sense of my American identity which recognizes that this country was founded on the principle that all persons are created equal, yet there are more American revolutions needed to get there. I need to be an active participant in this kind of nationalism, as a person with privileges, as a person of color, and as a Christian.

It makes sense of my Christian journey that started with experiences that fed my spirit as a youth, that continues to transform me through the renewing of my mind. It reflects my evolved understanding of what it means to believe in a just God, whose justice is based on making things right and good, not on a need to punish those that are wrong. I need to be more consistent in manifesting my beliefs through how I lead my life.

I am a typical Progressive Asian, American, Christian.

About the author: I’m a husband, parent, and life-long learner. By profession, I’m a Psychiatrist with a psychotherapy-based practice in the Los Angeles area. Put it all together and you also get a Social Emotional Learning (SEL) evangelist. 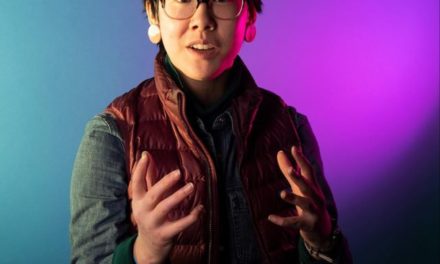